Carbon Neutrality Is Shaping The Fleets of The Future

According to TheClimateGroup.org, “The transport sector is the fastest-growing contributor to climate change, accounting for 23% of global energy-related greenhouse gas emissions.” Because of this shift to carbon neutrality, those same companies that are making carbon neutrality goals are going to have to consider the fleets they choose to move their products. Essentially, your company becomes a part of their wider goals, and to reach those companies that are the most devout in their carbon goals, your fleet has to reduce their carbon footprint.

Vehicle maintenance is critical to fuel efficiency, but even your maintenance programs can be a factor in your carbon footprint. Vehicle maintenance is a necessary factor in operating a fleet because nothing is worse than a vehicle being out of service due to a major mechanical failure that could have been prevented. Regularly scheduled maintenance keeps your fleet running at its peak performance, but it doesn’t have to be a source of more carbon emissions.

The final piece of the carbon neutrality puzzle comes from the last place fleet operators think to look: the dumpster. Everything you throw away that ends up in a landfill ultimately creates carbon emissions somewhere. An “average” ton of waste diverted from a landfill equals an estimated 2.5 metric tons of carbon emission reduction. So, every ton recycled means less carbon credit needed to offset your carbon footprint.

In addition, recycling used tires, pallets, construction and renovation waste, hazardous waste, electronic waste, and all waste fluids not only reduces the risks associated with improper waste handling but will also reduce your annual spending. Recycling done right is always cheaper than throwing everything into a landfill.

Companies across the globe are actively moving toward a reduction and elimination of their carbon footprint, and the logistics and transport industry is going to be affected the most. The time to get the ball rolling on carbon neutrality is now. The Secret to Carbon Neutrality Is in Your Dumpster An Inconvenient Truth: EV Lifecycles and the Waste They Produce 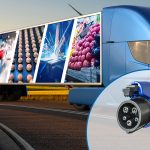