Have you ever wondered what happens to a car when it has reached the end of its life? How much of a car can be recycled? What about hybrid or electric vehicles? Do hybrid car batteries have to be recycled differently than traditional batteries? How robust is the automotive recycling market? Let’s take a look under the hood.

The business of automotive recycling

As it turns out, automotive recycling is big business.  Worldwide, cars are the most recycled consumer product ahead of newspapers, glass, aluminum, consumer electronics and carpet. In the United States, automotive recycling is the country’s 16th largest industry totaling an estimated $25 billion. Thanks to advances in technology, approximately 95% of vehicles are recycled each year according to the Alliance of Automobile Manufacturers.

Automotive recycling plays an important business and environmental role in conservation of natural resources, reduction in air and water pollution and reduction in solid waste generation. Automotive recyclers conform to rigorous regulations, at both the local and national level, in dealing with waste generated by salvaged automobiles. Some automotive recyclers are implementing recycling programs above and beyond required regulations aimed at reducing the potential effects of harmful materials to their businesses and communities.

“Automotive recycling has evolved into a sophisticated market and technology-driven industry that constantly changes to keep abreast of innovations in automotive technology and manufacturing techniques. Rather than merely crushing wrecked, abandoned, and mechanically disabled motor vehicles, today’s modern recycling facilities have a definitive operational scheme that maximizes the vehicle’s true market value, all the while providing an economic and environmental benefit to the community.” 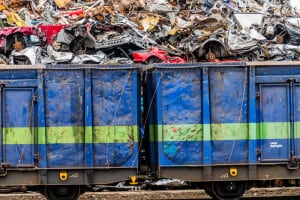 Ferrous metals, a byproduct of the automotive recycling process, are known for their tensile strength and are generally used (outside of car manufacturing) in large scale buildings and bridges. Image Credit: Lisa S.

Due to a car’s many parts some of which contain hazardous materials, the automotive recycling process is often a complicated (but important) endeavor. Steal and metal, tires, airbags, batteries, coolant and fluid, plastic and electrical components as well as other parts can and should be recycled on a car. Incoming cars are inventoried for parts before starting the car (assuming it still runs) to inspect it for leaks. Fluids are then properly drained from the vehicle.

Once all fluids have been removed, all non-metal car components are removed and the car is compacted and shredded. Metal fragments are then magnetically sorted into two categories – ferrous and non-ferrous.

The recycled metals are sorted and then mixed with new metal in order to manufacture new cars. According to the American Iron and Steel Institute (AISI), in 2004 more than 14.5 million tons of steel was recycled and reused from end-of-life vehicles. Recycled metals can be turned into new engine parts or a new chassis. With the introduction of hybrid vehicles into the market in the early 2000’s, auto manufacturers, consumers and aftermarket parties are suddenly faced with the automotive recycling of hybrid batteries. Image Credit: apiguide / Shutterstock

12 volt lead-acid batteries, commonly used in all non-hybrid autos, can and should be recycled. Dead car batteries are placed onto a conveyer belt in a machine with rotating hammers.  The hammers smash the batteries into pieces and a screen filters out the lead acid paste. Broken pieces of lead and plastic are then dropped into a vat of water where the lead and other metals sink (lighter plastic pieces then float to the top). Plastic pieces are then cleaned and placed into the back of a truck for transportation (for further recycling and re-manufacturing into new car batteries).

Acid is neutralized and turned into water using specialized vertical filters. Lead components are further processed using conveyer belts, chemical treatment and furnace technologies. Contaminants are removed and the liquid lead is poured into molds where chilled water hardens the lead into pure lead bricks. Those lead bricks are then used in the manufacturing of new batteries.

With the introduction of hybrid vehicles into the market in the early 2000’s, auto manufacturers, consumers and aftermarket parties are suddenly faced with what to do with hybrid batteries. These specialized batteries are typically either lithium-ion or nickel-metal based.  In addition to lithium and nickel, these batteries also contain other valuable precious metals. All this combined makes automotive recycling even more financially attractive. Based on the age of these first hybrid vehicles and batteries, the batteries themselves are just now starting to reach the end of their life. Thus, the commercial hybrid battery recycling market is just starting to take shape.

According to automobile information site Edmunds, “While there are more than 2 million conventional and plug-in hybrids and electric cars on the road in the U.S. alone, none have been around long enough to start contributing a meaningful flow of batteries to the recycling industry.” As reported by Consumer Reports, the United States has one lithium battery recycling pilot plant under construction in Ohio. As the hybrid battery market matures, the number of recycling facilities is expected to increase.

Edmunds goes on to say, “For owners of electric-drive vehicles, recycling is expected to be a painless — and even invisible — process. Automakers and the auto dismantling industry and its designated recyclers will handle the recycling. The car owner won’t have to do anything except get the vehicle and its faltering battery to a dealer.”

San Diego Gas and Electric (SDGE) head of technology innovation and deployment John Holmes has conducted studies on the application of using electric car batteries for energy storage (after they’ve reached the end of their car life). Holmes’ studies have shown that a battery at 70% capacity can serve as an energy storage ‘device’ for about 10 additional years. As stated in the same Consumer Reports article, “Car batteries may have a role in vast energy storage, as power plants seek to balance electricity generation by day from solar and wind, with consumer demand that spikes in the afternoon and evening.”

After using these batteries in a storage capacity, post-car application, the next life cycle would be recycling them and reusing the precious metals in manufacturing them into new hybrid car batteries. Recycling nickel-metal hybrid batteries (found in most conventional hybrid vehicles) has been tangible due to nickel’s high value. Other metal-based hybrid batteries (ex: lithium batteries used in plug-in vehicles) pose their own unique recycling processes.

“The advanced lithium batteries in most plug-in cars today are more difficult to recycle, in part because automakers use various chemistries, and the several chemical components have different recycling values. Lithium-nickel-manganese-cobalt batteries found in many modern plug-in cars, such as the Nissan Leaf, bring high recycling value because nickel and cobalt are both costly to produce. Cheaper chemistries being planned for future models that promise to help bring electric car prices down are still recyclable. Gaines explains that ongoing developments will provide more efficient ways to extract the elements, eventually making it cost-effective to recycle any chemistry.” (Source)

Hybrid batteries present a unique recycling opportunity for consumers and manufacturers, and that market continues to mature and the market share for hybrid vehicles grows.

Quest helps fleets across the country maximize their landfill diversion through the recycling of automotive components. To learn more about how Quest can help your dealership or fleet division better manage your automotive recycling program, minimize waste and maximize profits, fill out the form below.